I'm stepping out of my comfort zone to share information with you that creates major shifts within my patients. While I have spent years formulating how to present this information to motivate recognition and change, I believe it does not belong to me. It was provided to me by my higher power, therefore, it belongs to my higher power. It is my responsibility to share it with those who are ready to receive it and utilize it to recognize and step into their true selves which will raise their energy vibration.

I want to start my blog by talking about the difference between having an External Locus of Control vs an Internal Locus of Control. From my view point, our American Societal Construct, our societal belief system, is based on Power and Control. This means that many of us are taught from very young ages to seek external control; to seek control over other people or situations that we face or even the little things in life that hold no real relevance like having designated spots to place items. In order to gain and maintain external control, we utilize Power and Control Tactics. There are 10 different power and control tactics that any of us might use. 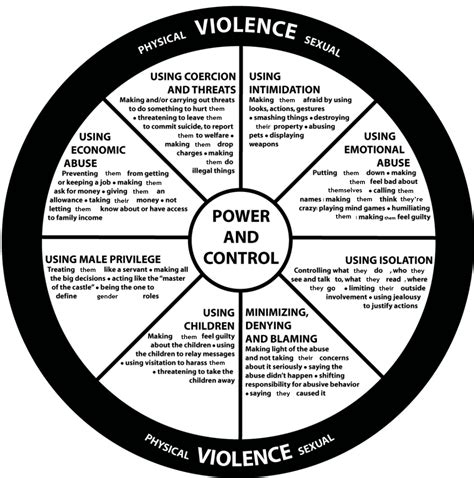 The outer portion of the wheel identifies Physical and Sexual Abuse. These two are considered to be overt tactics meaning they are obvious, most of us recognize them as forms of violence. The 8 tactics on the inside of the wheel are considered to be covert; they are not so obvious so many of us do not consider them to be forms of violence. The reality is that all 10 power and control tactics are forms of violence. They all create the same level of harm. There is not one form that is worse than any other. In our society, however, we minimize that reality through the belief that sexual abuse is worse than any other. It is important to understand that THEY ARE ALL FORMS OF VIOLENCE AND CREATE THE SAME LEVEL OF HARM.

Sexual Abuse involves any act of a sexualized nature directed towards or in front of another person. Sexual Abuse is a term that is all-encompassing term that includes sexual assault, rape and sexual abuse. For more details, please visit www.rainn.org.

Intimidation is designed to instill fear; fear that something worse will happen to the person if they do not give in and do what the abuser wants them to do. Intimidation involves slamming doors, punching holes in walls, throwing things, breaking things, using "the LOOK" or the glare , getting into another person's personal space without their permission, standing over them, getting in their face while yelling, displaying weapons, harming pets and the like.

Emotional Abuse involves yelling, screaming, name calling, putting the other person down, making them think they are crazy, saying or doing things to embarrass or humiliate the other person, playing mind games, using guilt trips or shame.

Isolation is controlling where the other person goes, who they see, how they spend their time; it's all about limiting their access to the outside world so they have to center their life more and more around the abuser.

Minimization, Denial and Blame (M/D/B) are what we use in order to avoid taking personal responsibility for the decisions and behaviors we've made. Minimization is where we make our own behavior seem like it's not such a big deal. An example of this is "you think that's bad, you should see what he did". Denial is denying the very choices and behaviors that we've used. Blame is putting responsibility for those choices and behaviors on other people or the system or anything other than ourselves. Not only do we use M/D/B to avoid taking personal responsibility and being held accountable but we also use them to avoid holding other people accountable for their choices and behaviors. We let them off the hook so we don't have to face the repercussions of their anger or whatever their power and control tactics may be.

Using Male or Female Privilege involves setting up the relationship so it is based on gender roles. Each person has to play a role in order to make the family work. These roles deny each person the ability to figure out and be who they truly are designed to be. They have to conform according to role expectations, in other words, what a male or female "should" look like.

Financial Abuse involves one person having control over the finances, limiting the other persons' access to or awareness of accounts or investments, setting an allowance for the other person, making them show receipts to verify purchases made, preventing them from getting or keeping a job, making them ask for money, taking their money, etc.

Coercion and Threats; Coercion is the pressure we put on another person to get them to give in and do what we want them to do despite them not wanting to. Coercion can come in the form of begging, pleading, cajoling, nagging, sulking, pouting, temper tantrums, etc. Children at the age of 2 typically begin throwing temper tantrums. This is developmentally appropriate. This is when each of us learn to gain control externally or to seek to control ourselves. When we throw a temper tantrum and our primary caretakers give us what we want then we learn to throw temper tantrums to get what we want. When, instead, they respond with limits and putting us in time out, then we learn to look at our behavior, think about what it's the problem is that we are facing and use our words to communicate what is happening; this is how we gain control over ourselves.

Another reality about these 10 power and control tactics is that all it takes is the use of one tactic one time and we put ourselves in the position of attempting to gain external control. it's control that is not ours to have. Every time we seek to gain external control, we give up our ability to control ourselves. Self-control is the only real type of control that we can have; that is what each of us truly needs but we can not have both at the same time. Therefore, when we seek external control using any power and control tactic then we automatically give up our ability to control ourselves and respond to situations in healthy ways.

If you would like to learn more about this please contact me at 352-446-2011 to schedule an appointment. I look forward to connecting with you!

The 15 Styles of Distorted Thinking

The dictionary defines expectations as "a belief that someone will or should achieve something". What this means is that expectations are based on "shoulds"; rules formed by someone which they expec